Future fuels: LNG is powering the next generation of shipping fleets

Liquefied natural gas (LNG) is a versatile fuel used in a variety of interests. It is a lower emissions fuel, producing comparatively fewer emissions than traditional vehicle fuels such as petrol, diesel and heavy fuel oil.

These properties have made LNG an attractive alternative for shipping companies looking to reduce the emissions their fleets produce. In fact, if all bulk iron ore (Australia’s chief export) shipped from the region to other countries was transported by LNG-fuelled vessels, it could reduce sulphur and particulate matter by 95 percent and nitrogen by 85 percent. This is similarly true in the cruising industry, which has also benefitted from the switch to LNG fuel.

The world’s first LNG-fuelled bulk carrier was announced in 2016 and delivered in 2018 through a collaborative effort between Korean companies Hyundai Mipo Dockyard and Lishin Logistics. 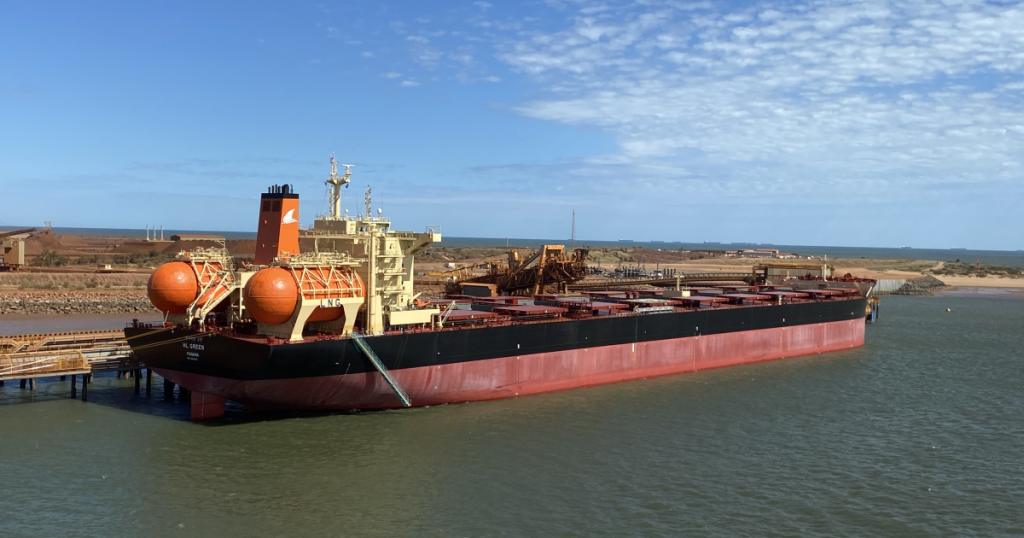 The HL Green – Photo supplied by the Pilbara Ports Authority

Now, the world’s largest LNG-powered bulk carrier has made history with its maiden voyage, successfully travelling from South Korea to Australia and back. The ship, HL Green, launched from Mokpo in South Jeolla province of South Korea on December 11 last year, and reached its destination at Port Hedland in Western Australia, Australia’s busiest port, on January 6. The HL Green, which has a sister ship called the HL Eco, is 292 metres long, 45 metres wide and 24.8 metres tall. The vessel is distinctive for its twin LNG fuel tanks located at the stern, which can store 1600 cubic metres each, the largest capacity in the world for tanks of their type.

It was loaded with 180,000 metric tonnes of iron ore at Port Hedland and safely returned to Gwangyang steel plant in South Korea on January 21.

“Pilbara Ports Authority was pleased to welcome HL Green and her crew to the Port of Port Hedland, as another milestone in our support of the transfer to LNG fuel as a way to reduce shipping emissions,” said Pilbara Ports CEO Roger Johnston.

Brighter and the Property Council at the Future Cities Summit

The Property Council, Australia’s leading advocate for all things property, held the Future Cities Summit on the 24th of May. The event was a huge success, attracting over 400 professionals involved in infrastructure and …Read more
May 14, 2020 Clean Energy Future

Heating and cooking are vital parts of our day to day. The ease, convenience and speed of a gas stove or hot water system is just a part of life. It’s something so innate, …Read more
Mar 09, 2021 Clean Energy Future

Western Australia is hard at work to reduce emissions that contribute to climate change. Projects such as the Chevron-led construction of a microgrid in the coastal town of Onslow, powered by solar and natural gas, or the development of …Read more
>
Trending Sep 30, 2019 People & Industry Celebrating World Space Week Mar 08, 2019 In The Community Sustainable Agriculture Thriving Alongside Natural Gas Feb 14, 2019 In The Community Arrow Energy Gets Festive for Chinchilla Melon Festival Jun 12, 2020 At Home Natural Gas and Crown Lager: The Energy Behind an Australian Staple Jan 28, 2020 At Home The Chef’s Secret: Season Two – BBQ Fish and Chips To stay up to date
with Natural Gas Subscribe