Located in the Pilbara region in Western Australia, Karratha is a hub of activity for the Australian natural gas industry. Servicing the North West Shelf and Pluto LNG projects, the area is home to over 22,000 people and it’s boom across the natural gas and mining industries means that the City of Karratha has seen a population increase of 31% over the last 10 years.

The resource-rich area coupled with its coastal position has made Karratha an attractive corridor to export Australia’s commodities to the rest of the world.

The North West Shelf Project is an offshore oil and gas production, supplying both domestic and international markets. It has been operation for the last 35 years and is one of the world’s largest LNG producers. This is a joint venture between six major international companies: Woodside (as the operator), BHP Billiton, BP, Chevron Australia, Japan Australia LNG, Shell Australia.

The Pluto LNG project is also based in the area, processing gas from the offshore Pluto and Xena gas fields. It has delivered more than 400 LNG cargoes since 2012 and $7.6 billion worth of local content was used during the construction phase.

Woodside is progressing with projects to expand current operations, such as the Pluto-Karratha Gas Plant Interconnector, unlocking value for both Pluto LNG and the North West Shelf projects.

Since 2009, Woodside has invested more than A $19.4 million on behalf of the North West Shelf Project and Pluto LNG in the City of Karratha, collaborating with government on ten community infrastructure projects that improve amenity, childcare, health and education.

They are aligned with many community partners in the town and region including the City of Karratha to deliver the Red Earth Arts Precinct, the Ngarluma Yindibardi Foundation Ltd which promote of the interests of Ngarluma and Yindjibarndi people, Karratha Community House and local schools.

The company has also been an active driver of encouraging their employees to relocate to the area. Meet Ceri and Michael Newnham below and hear their story of recently moving to Karratha. 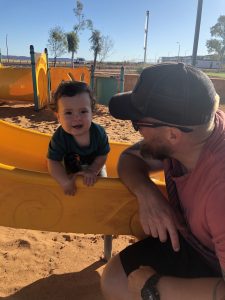 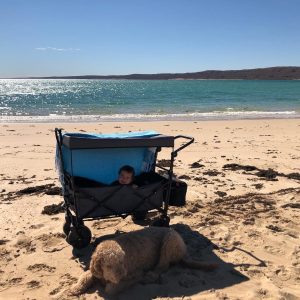 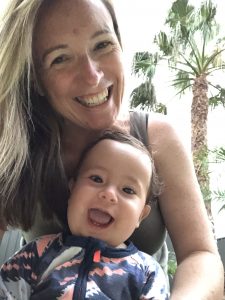 A new family and a chance to escape the city saw Michael and Ceri Newnham make the move from Perth to Karratha in January 2020.

Together, with their 11-month-old Harry and beloved dog, Hendrix, the couple who both work for Woodside decided to relocate their lives to the Pilbara town, which is known for servicing the resources industry in Western Australia.

Michael is a Production Technician, while Ceri is currently on maternity leave from her role as an Executive Assistant. Both made the choice to move to Karratha after Harry was born, giving Michael the opportunity to wind down his FIFO commitments and transition to a residential position.

The last few months have not been without some challenges, including moving right before Tropical Cyclone Damien hit the Karratha region in February this year and having to live in isolation because of COVID-19.

Despite this, the couple know that they’ve made the right choice.

“It has been a big adjustment, but it is a great place to bring up a small family, and we’ve fit into the community so quickly.”

“[Karratha] is a close knit-town and I enjoy fishing, camping and the outdoor lifestyle so it’s been great,” said Michael.

While Michael hails originally from the Isle of Wight in the UK, Ceri grew in another Pilbara town, Newman before they both ended up being based in Perth.

When the opportunity came up for Michael to move from a contractor to permanent position with Woodside, it was an easy decision to make.

Woodside for their part have been extremely supportive in the transition to Karratha, and Ceri credits the “Woodside family” there for making the move even more seamless.

“In the middle of isolation, while Michael was at work and I couldn’t leave the house, people I hadn’t met were dropping food to my front door, it was lovely!”

Woodside also provided moving assistance in the form of packing up their belongings in Perth and finding new accommodation in Karratha.

Both agree that the change of scenery has been just right for them.

As Ceri aptly summarised it: “I love life being a bit slower (than Perth), it’s so easy to catch up with friends, and not to mention that the weather is great in winter too!”

The fake reefs where fish flourish

What is a an ‘artificial reef’, and how do these fake formations become magnets for marine life and a destination for divers? Australian gas companies are involved with the creation of these reefs, which …Read more
Aug 14, 2020 In The Community

National Science Week runs every year during the month of August. Starting on the 15th, scavenger hunts, wildlife webinars and explorations of outer space will be streaming for a week that’s sure to be …Read more
Aug 07, 2019 In The Community

How Landholders and Natural Gas Companies in Queensland are Coexisting Respectfully

Michael Taylor from “Fairlands” in Wallumbilla, Queensland, shares his perspective on how gas companies and landholders have learnt to coexist over the years and treat each other respectfully. Michael runs Midwest Rural Traders in Wallumbilla …Read more
Sep 02, 2019 In The Community