FSRU: The Giants of the Sea

Floating Storage Regasification Units (FSRU) are specially designed ships that have the capacity to store and convert large volumes of liquefied natural gas (LNG) for transportation by land and sea.

The liquefaction process requires that the LNG be stored at a consistent temperature of around negative 162 degrees Celsius to avoid vaporisation during transport. The extremity of the cold requires that the vessels’ storage areas be built using special alloys capable of withstanding constant low temperatures.

Large ships called LNG carriers load and unload cargo via either a mechanical hard loading arm or cryogenic hoses, depending on the type of ship. The gas is liquefied to save space during transportation (the gas is about 600 times less voluminous in liquefied form) and can subsequently be converted back into a gas — or ‘regasified’ — by the FSRU when the LNG carrier reaches its destination.

“FSRUs are true giants of the sea, so large that they can be classified as offshore installations in their own right.”

There are a few methods employed to convert the LNG back into gas, but a common method used in warmer countries like Australia is the open-loop system, whereby seawater is pumped through the FSRU’s sea chests to a regasification train located at the bow of the vessel. This regasification train uses the seawater to heat the LNG back into gas form at atmospheric temperatures. Unlike liquids such as water, LNG vaporises at relatively low temperatures, ensuring that this process is relatively quick and energy efficient.

In colder environments where seawater is typically below seven degrees Celsius, a closed-loop system is employed. This uses steam from the FSRU’s boilers to heat fresh water, which is circulated throughout the onboard regasification plant. A combination of these two systems is also employed in certain environments.

This gas is then transferred to onshore facilities via a high-pressure pipeline or subsea buoy in the FSRU’s hull. Using the buoy method is particularly useful in scenarios where it is not possible for the FSRUs to unload near the shore. Gas can also be delivered to ground vehicles such as trains and trucks for further transport by land. 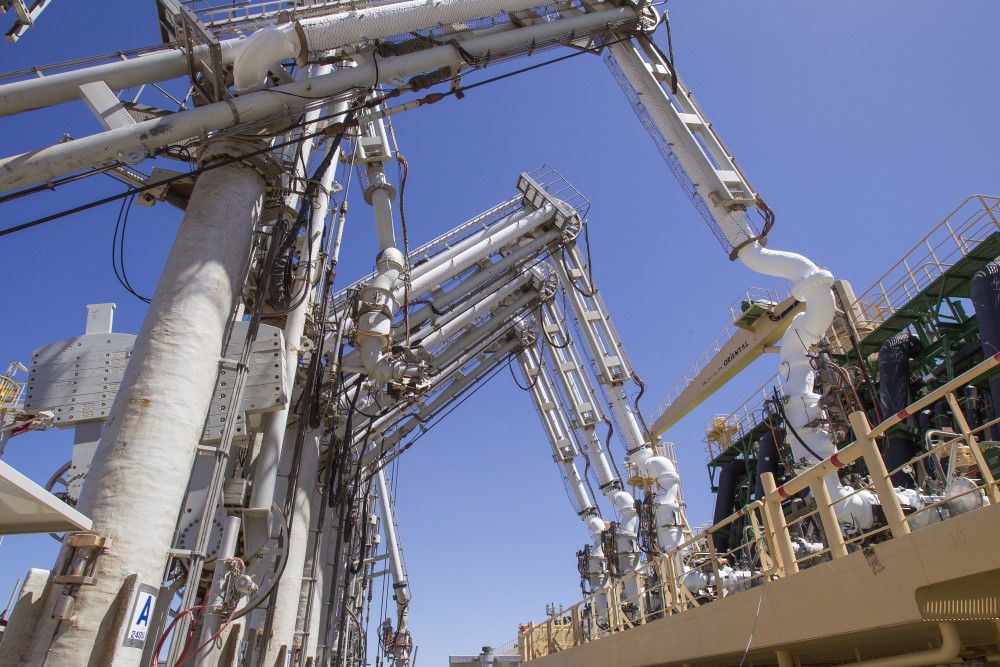 FSRUs are true giants of the sea, so large that they can be classified as offshore installations in their own right. Norwegian shipping company Höegh’s FSRU vessel Esperanza, which first berthed in Australia at QGC’s Curtis Island plant in Queensland in 2018, is a good example of the sheer scales involved: it is 294 metres long (roughly the length of three rugby pitches) and 46 metres wide, boasting an LNG storage capacity of 170,000 cubic metres.

Permanently moored near–shore, FSRUs are cheaper, quicker to implement, and more environmentally friendly than equivalent onshore plants, and can be easily moved to different locations when required. They can also be purpose-built from scratch or converted from existing tankers, enhancing their inherent flexibility.

They truly bring new meaning to the term ‘gas giant’.

How curiosity led Shelby to a new world in engineering

Shelby Broad is a Vacation Student in Subsea Integrity Management with global engineering services company, Wood. She is currently completing her Masters of Professional Engineering (Chemical), after graduating with a Bachelor of Science, majoring in …Read more
Feb 18, 2021 People & Industry

Game-changing Hackathon This Weekend in Perth

Are you a WA uni student who constantly has great ideas for real-world problems? Well, there’s nothing better than a hackathon to get some exposure. This weekend the Chevron Hackathon kicks off in Perth, …Read more
>
Trending Apr 26, 2021 Clean Energy Future Emissions ‘Halfway to Zero’ with Natural Gas May 28, 2020 At Home More Women in STEM Key to Brighter Future Jul 14, 2021 Clean Energy Future Hydrogen and You Feb 03, 2020 At Home Your Opinion: What’s the Best Thing About a Summer BBQ? Dec 18, 2018 At Home Energy Saving Tips To stay up to date
with Natural Gas Subscribe